Marijn Janssen is a full Professor in ICT & Governance at the Information and Communication Technology section of the Technology, Policy and Management Faculty of Delft University of Technology. He is Co-Editor-in-Chief of Government Information Quarterly, Associate Editor of the International Journal of Electronic Business Research (IJEBR), Decision Support Systems (DSS) and Information Systems Frontiers (ISF). He was ranked as one of the leading e-government researchers in a survey in 2009 and 2014 and has published over 500 refereed publications. More information: www.tbm.tudelft.nl/marijnj.

Dr. B. K. Murthy is currently working as CEO, Innovation and Technology Foundation, IIT Bhilai, Chhattisgarh. Previously he worked in the Ministry Electronics and IT (MeitY), Government of India for 35 year and took VRS as Senior Director (Scientist G) and Group Coordinator (R&D in IT and NKN). He is responsible for promotion of R&D in the area of IT; implementation of the Viswesvaraya PhD Fellowship scheme; National Knowledge Network, Digital India Infoway,   Centre for Development of Advanced Computing and  National Institute of Electronics & Information Technology. Dr. Murthy spearheaded for bringing out the National Strategy on Blockchain Technology from the Ministry of Electronics and IT which was released in December 2021. 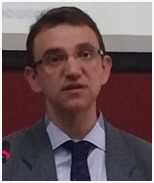 Luis Martínez is currently a Full Professor with the Computer Science Department, University of Jaén, Jaén, Spain. He is also Visiting Professor in University of Technology Sydney, University of Portsmouth (Isambard Kingdom Brunel Fellowship Scheme), and in the Wuhan University of Technology (Chutian Scholar). He has been main researcher in 16 R&D projects, also has published more than 190 papers in journals indexed by the SCI and more than 200 contributions in Inter/national Conferences related to his areas. His current research interests include multi-criteria decision making, fuzzy logic-based systems, computing with words and recommender systems. He was a recipient of the IEEE Transactions on fuzzy systems Outstanding Paper Award 2008 and 2012 (bestowed in 2011 and 2015, respectively). He is a Co-Editor-in-Chief of the International Journal of Computational Intelligence Systems and an Associate Editor of the journals, including the Information Sciences, Knowledge Based Systems, Information Fusion. He is IFSA Fellow 2021, senior member of IEEE and of the European Society for Fuzzy Logic and Technology. Eventually, he has been appointed as Highly Cited Researcher 2017-2021 in Computer sciences.